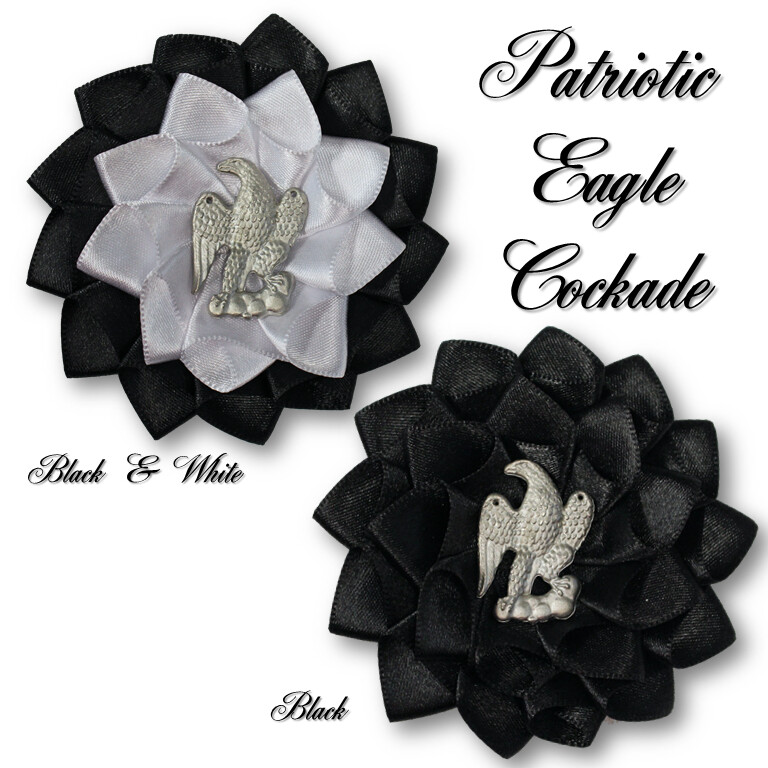 Celebrate patriotism with this cockade from the Founders' era! The style comes directly from the War for Independence, the eagle was designed by George Washington. This cockade is approximately 3" wide.

The Philadelphia Centinel said on July 4, 1798: “It has been repeatedly recommended, that our citizens wear in their hats on the day of Independence, the American Cockade, (which is a Rose, composed of black ribbon, with a white button, or fastening) and that the Ladies should add to the attraction of their dress…this symbol of their attachment to the government, which cherishes and protects them – either on their breasts or in their bonnets.
"The measure is innocent; but the effect will be highly important. It will add cement to the Union, which so generally and so happily exists. Every cockade will be another edition of the Declaration of Independence, and the demonstration of it, by this national emblem now, will be as highly laudable as the display of the immortal instrument of 1776 was then….

"All those, who have not had opportunity to sign the address [of Independence], and who feel themselves Independent Americans, cannot hesitate to show by some outward mark, that they love their country better than any other in the world; this mark ought to be the black cockade. The Ladies, we understand, are universally in favor of the measure; and if they lead, who will not follow?”