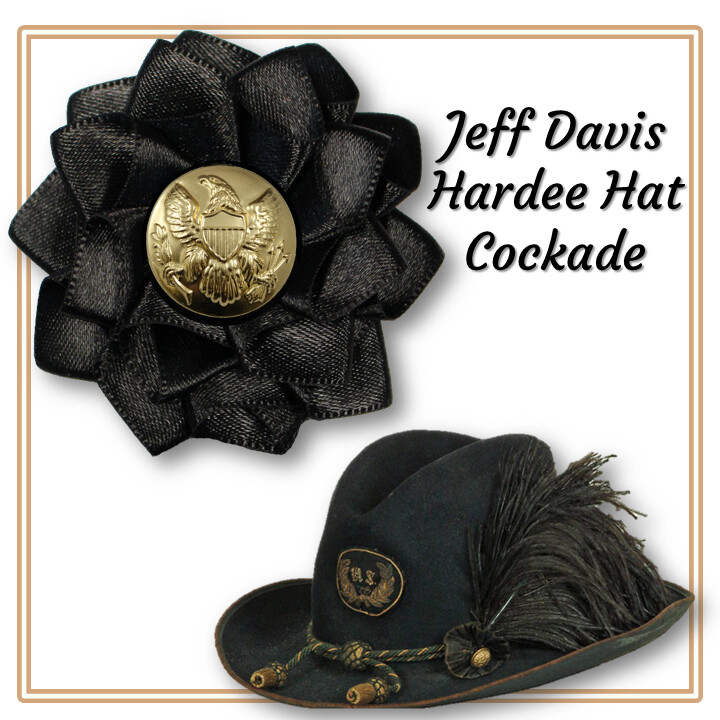 This sharp cockade is approximately 2.5" across, adorned with a Federal eagle button, and comes with a silver-plated pin back. Choose silk or satin.

In 1855, Secretary of War; and future President of the Confederacy, Jefferson Davis directed the formation of two new regiments of cavalry. A group of officers, appointed to make equipment recommendations, suggested a flamboyant new hat for the cavalry. The hat is often referred to as the "Jeff Davis" hat due to the fact that the hat was introduced during his tenure as the Secretary of War.

It's also referred to as a "Hardee Hat" due to its association with William Joseph Hardee, a career officer in the U.S. Army from 1838 until he resigned his commission on January 31, 1861 and joined the Confederate States Army. Following the formation of the 2nd U.S. Cavalry in 1855 at the behest of Jefferson Davis, Hardee assumed the position of Senior Major (and then in 1860, as Lieutenant Colonel of the 1st U.S. Cavalry). Coinciding with his 1855 cavalry service, Davis directed Hardee to develop a book on tactics. The resulting publication became the most popular drill manual of the era, used by both the U.S. Army; and later, the Confederate Army. Then and now, the book is commonly referred to as “Hardee’s Tactics.” Hardee’s position with the cavalry, notoriety as a tactician, and his military prevalence, all point to why the hat is most associated with his name.