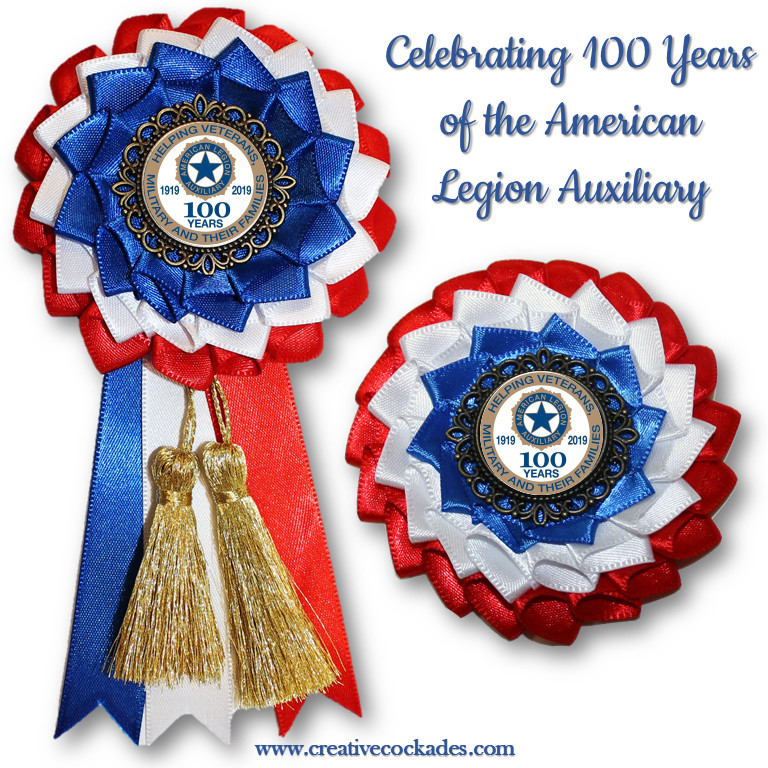 SKU 00425
$20.00
In stock
1
Product Details
This beautiful rosette is 3" across. The tails and tassels are approximately 3" long. It is attached with a silver-plated pin back.
The American Legion was chartered by Congress in 1919 as a patriotic veterans organization. After its formation in 1919, a number of existing women's organizations wanted to become the official affiliate of the Legion. The committee decided to create a new organization made up of the women most closely associated with the men of The Legion. This Auxiliary would perform those phases of Legion activities that were more suitably performed by women. In less than one year, 1,342 local units in 45 states of the Women’s Auxiliary to the American Legion had been organized.
The American Legion Auxiliary is responsible for various programs including Girls State, Girls Nation, the Poppy program, and the Veteran Affairs and Rehabilitation program. The Poppy program connects the image of the poppy with the sacrifice of men and women who have served and died during war. Since the programs inception in 1924, members have distributed poppies, most handmade, in exchange for contributions to assist active-duty military, veterans, and their families.
The Veteran Affairs & Rehabilitation program promotes the mission to enhance the lives of those the Auxiliary serves by providing opportunities for members to serve as volunteers at VA health care facilities.


The ALA Girls State and Girls Nation programs give aspiring young women leaders the opportunity to learn the importance of responsible citizenship. During Girls State, students are assigned to a mock city and spend a week learning about the political process. Each year two young women are selected from each Girls State program to travel to Washington, D.C. Girls Nation. During the program students run for office, elect a Girls Nation president, meet government officials and visit the White House.