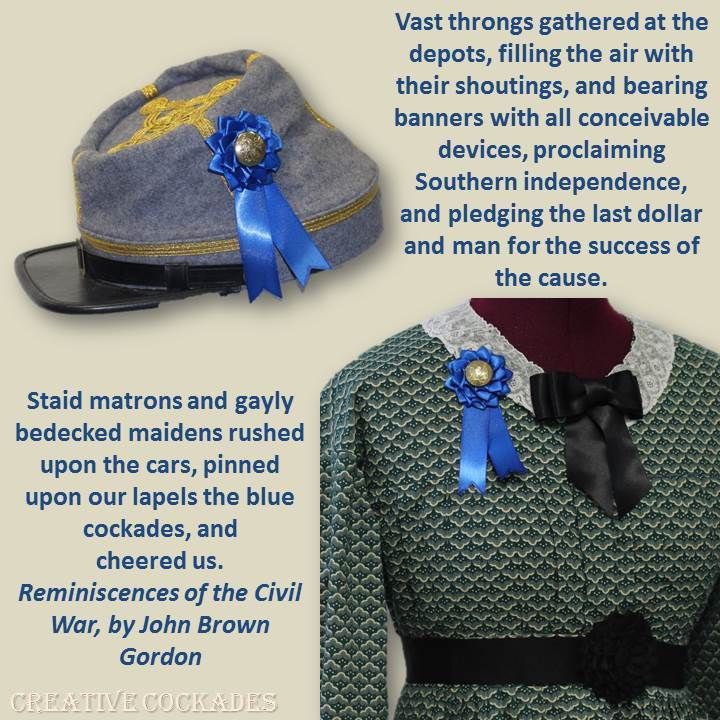 In Dixieland I'll take my stand!

Men, woman and children wore these Southern patriotic rosettes during the Civil War to show support for secession. This beautiful cockades is based on 1860s original cockades. The perfect holiday gift for him or her!

Secession Cockades were worn in the 1860s by anyone who sympathized with the southern cause. Since they were initiated in South Carolina, they were often blue like the South Carolina flag.

"Alabama's governor had given us the coveted "chance," and with bounding hearts we joined the host of volunteers then rushing to Montgomery. The line of our travel was one unbroken scene of enthusiasm. Bonfires blazed from the hills at night, and torch-light processions, with drums and fifes, paraded the streets of the towns. In the absence of real cannon, blacksmiths' anvils were made to thunder our welcome. Vast throngs gathered at the depots, filling the air with their shoutings, and bearing banners with all conceivable devices, proclaiming Southern independence, and pledging the last dollar and man for the success of the cause. Staid matrons and gayly bedecked maidens rushed upon the cars, pinned upon our lapels the blue cockades, and cheered us by chanting in thrilling chorus:

"In Dixie-land I take my stand

To live and die in Dixie."